In 1753 Prussian king Frederick the Great has ordered for the two first blast furnaces to be built on the bank of Mała Panew river, where the town of Ozimek now stands. The ironworks was named Malapane. Domestic coke was first used for the process 34 years later, thanks to what Małapane became an European leader of iron production. Two years later Ozimek was the leader again, this time of iron bridges manufacturing.

The first iron humpback bridge was made for the Lower Silesian town Łażany. The bridge does not longer exist, but the more advanced chain bridge in Ozimek does. It was opened for use on September 12th, 1827 and was a progressive work of Karl Schottelius, the iron manufacturer appointed by the king. In that time the bridge was an one of a kind construction. It was the main bridge by which one could get from Dobrodzień to Opole. The cost of manufacturing it has been 4200 thalers.

The bridge’s load carrying capacity was 3 tons. The construction itself has survived many dangers, for example the great flood of 1830 which destroyed the dam on Mała Panew. In 1854 the arch was strengthened and the way the bridge was supported by chains was changed. Since 1945, after a serious damage occurred, crossing the bridge by cars is not allowed. In 1969 the bridge was registered as an object of cultural heritage.

The bridge’s arch is suspended by iron chains, which are in turn connected to two cast iron pylons, consisting of moulded open work sheets of metal, topped with neo-gothic style portals. The whole object weights about 55 tones, it rests on concrete abutments. The span of the pylons is 31,5 metres, and the arch is 28,6 metres long and 6 metres wide. The bridge consists of about 1600 iron parts, most of which were hand wrought. The bridge has survived in it’s almost original state, which does not happen often.

The bridge is what Ozimek prides itself the most on, it is pictured in the town’s logo. Renovation works of the bridge has begun in Autumn of 2009. Bridge was dismantled and all metal parts were given a meticulous makeover to restore their original details. The abutments and arch were strengthened, the last was also, for safety reasons, suspended on additional steel ropes (which weight around 10 tons, their length being over 400 metres.) Presently, the bridge’s load carrying capacity is 22 tons. The bridge is being illuminated at night. 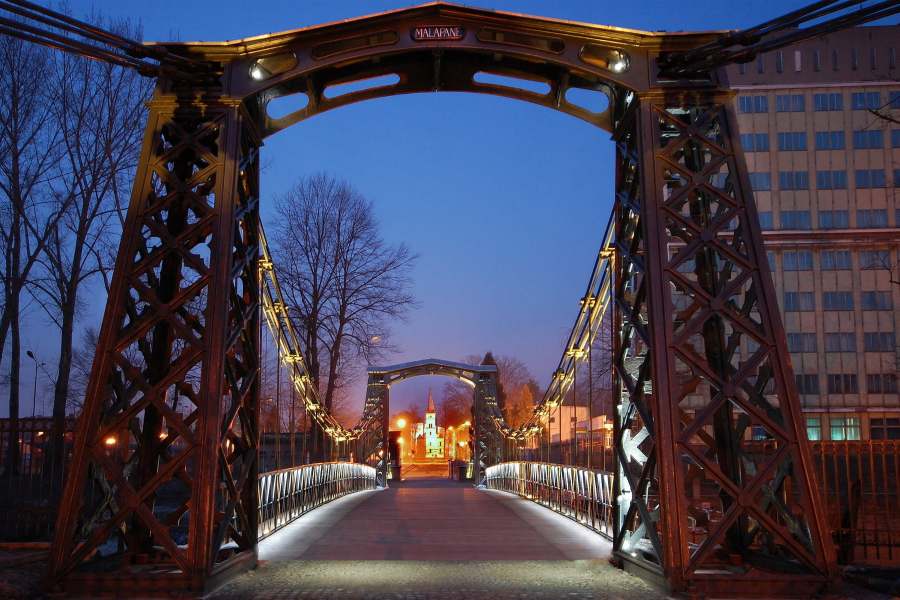 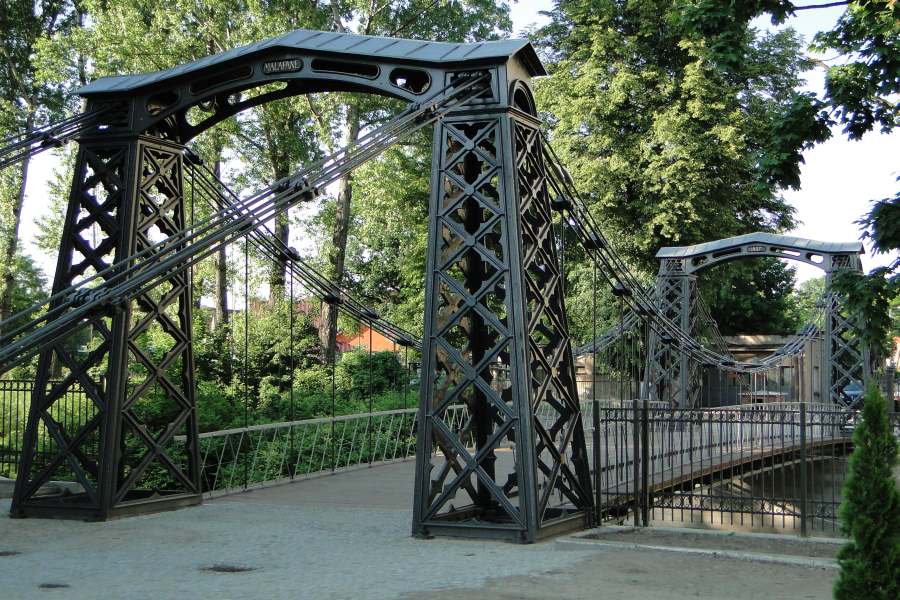